LOTUS comes with an open system for importing own vehicles and objects, as well as creating your own map. Some Addon-Developers have already joined the team at an early stage and are using our content-creation-tools diligently. We will introduce them here:

Another Addon-Developer is Rolf from Hamburg. He wants to bring his childhood memories back to the virtual life, so he is using the looooong winter evenings for his Handicrafts. Take a look into the tram! On his website http://www.v6e.de Rolf is presenting his hobby - the tramway and his virtual models. He is working on them since 1999. 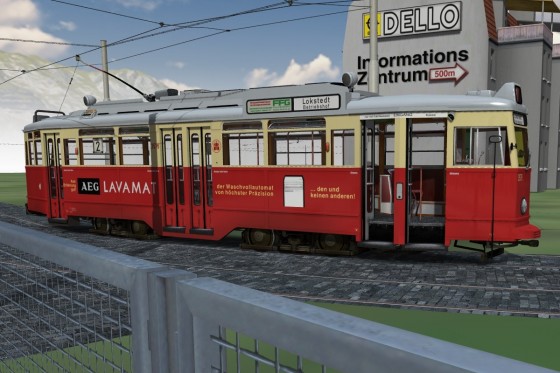 103 V6 were built between 1949 and 1952 by the tram manufacturers "Linke-Hofmann-Busch" (LHB) and the HHA tram-workshop "Falkenried". The "V" means "Vierachser" (4-Axle tram), the "6" is the version number, the "E" was later added when the tram was rebuilt without the conductors cabin, making the tram an "Einmannwagen" (one-man-tram without conductor).

For the V6-trams there were also matching trailers, but they were already scrapped when the addon takes place. Only single trams were kept in service in 1978s Hamburg. If you are a trailer-lover, you might also like the special-trailer for Winter-service which can be dispatched with the V6E.